How (not) to sell a business 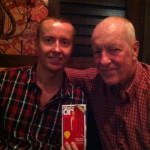 It’s been a year since my Dad died and he taught me everything I know about business. One of my first memories is going to the printing factory he owned one Saturday morning and sitting and drawing while he worked.

So I thought I’d use this post to tell you about how I came to run and sell the family publishing business.

About a year and a half ago, Dad was told he only had 12 to 18 months to live. (He got eight, the only time he ever under-achieved in his life.) Just after we found out, he rang to see if I was free for lunch. It was during the lunch he asked if I’d buy the business. Immediately and without thinking I said yes. It’s pretty hard to say no to your Dad in that situation.

I was actually quite excited and thought it was a great opportunity. My own magazine! We could be the next Murdochs! Rupert started with The Adelaide Advertiser – why not me with What’s On in Sydney? We printed 600,000 copies of the magazine each year and had incredible distribution through every hotel in Sydney, a fantastic base to build on.

My brothers were immediately dubious. I’d never expressed any interest in running the magazine. I had my own thriving freelance writing business and was already working like a navvy. Was this really a good idea?

I went ahead anyway, approaching it as I do most things – like a bull at a gate. My brother Rohan, who is a graphic designer, immediately redesigned the magazine. We built a website and Dad started introducing me to all the advertisers. This was no mean feat for someone who was necking Endone like they were lollies to cope with the pain of metastasised bladder cancer, chemotherapy and radiotherapy.

But I was lucky because I got to spend two or three days a week with Dad and, as I said at his funeral, no matter how sick he was, he would greet me each morning with a little kiss and a “come in darling” as he taught me the finer details of his life’s work.

So we pressed on. But as the months rolled on I came to realise something that would make me singularly unsuited to running a publishing business. I love writing; I loathe selling ads. I tried to fake it, but I remember one night realising I was on the wrong path. I said nothing straight away, hoping I’d change my mind, stressed to the max about how I was going to tell Dad I’d made a mistake, as was blatantly obvious to everyone around me.

But one day I couldn’t take it any more and I rang Dad in floods of tears and told him I did not want to run the business. I was devastated and felt I had really let him down. This was only a few weeks before he died. One of my brothers made the point at the time that I should have had the balls to ‘fess up a lot earlier.

Nevertheless, I made it clear I was in no way walking away from the business and was prepared to run it until we found a buyer. At about that time Dad was admitted to palliative care.

Of course, all this happened just as the latest issue of the magazine came out. Despite being barely conscious, he arose from his deathbed when the first copies were delivered and critiqued the book, the first issue under my reign, page by page with me, my brother, my stepmother and his business partner, my Uncle Timmy, in attendance around the bed. All 100 pages. We joked afterwards we thought he’d get to page 100 and breathe his last.

Just before he died, Tim and I went to see a business broker and set the ball in motion to sell the business. I think Dad was a little sad the magazine was being sold, but I also think he was confident Tim and I would look after everything. About two months later and after a protracted negotiation process, we sold it and I’m pleased to say it’s still a success under the new owner.

It’s easy to say this is a classic case of the consequences of no proper succession planning. Dad had tried to sell the business for a number of years, but hadn’t been able to, partly because he was stubborn about the value of the business and partly because it was exposed to the difficult markets of tourism and print publication. But the reality in any business is that you deal with situations as they arise.

Do I wish he’d brought my brother and me into the business sooner? I would never have liked selling ads, but Dad didn’t really like writing and I do wonder what might have been if he had involved us earlier, my brother designing, me writing and Dad looking after the commercial side. Potentially we could have employed someone to sell the ads to replace him if we’d structured it properly earlier.

But really, I just like writing and editing business stories, and in life, you should follow your passion. This experience, although rough at the time, is one of the defining moments of my life. I learnt so much that I’m now able to use in my work and it also gave me great satisfaction to know I’d done the right thing by Dad and the family in the end; not walking away, but seeing the sale to fruition. Doing the right thing is really what matters in life, which was also one of Dad’s great philosophies.

Does your workplace have a drinking problem? Does gold still have a place in a portfolio?
Uncategorized