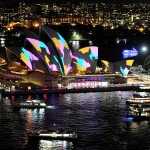 Sydney is often seen as a destination for the summer months. To counter this perception, The Vivid Sydney Festival was developed in 2009 to attract visitors during winter.

Destination NSW’s CEO Sandra Chipchase says it wanted to secure an event that would reinforce Sydney’s brand and the perception of Sydney as a key creative hub during the cooler months.

“We wanted an event that had the potential to grow year-on-year and become a hallmark Sydney event,” says Chipchase.

When the event was first launched, Chipchase says it was important to identify key players that would need to work together to make the event a success.

They included the City of Sydney, the Protocol and Special Events branch of the NSW Department of Premier and Cabinet, NSW Police, NSW Roads and Maritime Services, the Sydney Harbour Foreshore Authority, Sydney Ports Corporation and Destination NSW.

Key venues including the Sydney Opera House also had to be engaged and a core team that included Events Sydney (which is now part of Destination NSW) and events company Mi5 initially worked together to grow the event.

“Once we had engaged all the different parties it was a process of selling people on the concept and seeking input into the program,” says Chipchase.

Originally, international curators put together the event, which Chipchase says was to help give Vivid Sydney a global platform.

In the first year Vivid LIVE! (a component of Vivid Sydney comprising the music program and lighting of the Opera House sails), was curated by former Roxy Music member Brian Eno. In the second year Vivid LIVE! was curated by experimental performance artist Laurie Anderson and rock musician Lou Reed. Ignatius Jones has been the key creative consultant since 2011, although he has been involved from the start.

“By using international curators we were able to tap into their networks, which was a deliberate strategy to build Vivid’s profile,” she says.

There are now three festival directors under Jones who each look after light, music and ideas. “If you just have one festival director they usually have expertise in only one area. If you have three you have access to a deeper pool of skills,” she says.

Chipchase says the fact locals now largely curate Vivid reflects the maturation of the event and the fact Australian curators have their own coterie of international contacts that can be tapped into to build the profile of Vivid around the world.

In terms of assessing the suitability of Sydney’s infrastructure to stage an event such as Vivid, Chipchase says successful events such as the annual New Year’s Eve celebrations, as well as the Sydney 2000 Olympics, are proof the city has the right infrastructure to deliver an event that takes place over three weeks and draws hundreds of thousands of visitors into the city.

“We’re Australia’s major event capital and we have a great track record in running events like Vivid,” she says.

She says the event is focused on central Sydney because Vivid is an international event and international visitors immediately identify the centrepiece of the action, the Opera House, with Sydney.

“We do want to grow the event to encompass a wider area and this year we are extending the lighting sculptures to the new arts precinct of Walsh Bay,” explains Chipchase, adding that in the future it’s likely Vivid will extend through to Barrangaroo and eventually Cockle Bay, Darling Harbour and Chinatown.

The festival has become one of the key creative events of the year. Chipchase says many of the 150,000 people who work in Australia’s creative industries – film, music, performing arts and the media – are employed in some capacity through Vivid.

“It’s also a source of revenue for the tourism sector and for the hotels and restaurants around Sydney. The Sydney Harbour Foreshore Authority tells us restaurants and retailers do phenomenal business during Vivid.”

Originally appeared in the Australian Financial Review 17 May 2012