Why I have a reverse mentor 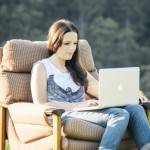 Despite my best efforts to deny it, I’m not getting any younger. Every day I seem to come across new technologies, new words and new ways of doing things that, frankly, are starting to scare me. When did I get so old that using certain words makes me look like an idiot? I’m talking to you, bae.

Anyway, I’m of the belief that unless you keep up with the times, you’ll be left behind in a world where technology moves at lightning speed. It seems if you miss a single smartphone software upgrade, you’ll never catch up with technology again.

Which is why I decided to ask awesome Ashleigh Ryan, 27, to be my “reverse mentor”.

What I wanted to find out from Ash is who she admires from a business perspective, and why; what people her age want from the businesses they deal with and what turns them off.

She names US internet star Gary Vaynerchuk, 39, as someone she admires for his authenticity.

Vaynerchuk took his family’s wine business from a $US5 million to a $US30 million operation in just five years. He now runs a digital media agency and a venture capital fund. He invested in all the big tech start-ups – think Twitter, Snapchat and Uber.

“Gary’s built a strong personal brand and is really active on social media, delivering lots of value through his podcasts and blogs,” Ash says.

“He’s just himself and doesn’t try to hide who he is and doesn’t worry about others’ opinions,” she says.

At the other end of the spectrum, Ash says she admires smaller businesses like Popsphere.

“This is one girl who’s making beads and jewellery from home. She’s really creative and really doing well.”

However, Ash says she’s wary of the plethora of unscrupulous “business coaches” who have infected the internet, making get rich quick claims and unreal promises to new business owners, who believe their shtick.

She’s also unimpressed by businesses that are slow to respond to her requests for information or a quote.

Once she’s made initial contact, she expects enterprises to come back to her within 24 hours or less.

“If I’m buying from a business, they need to have a website that’s mobile friendly, [and has] client testimonials, good photos and videos and blog content. I want to learn about the person behind the business and their story. I also want it to be easy to get in touch when them.”

She wouldn’t buy from a business that did not have an active social media presence.

This was a lightbulb moment for me. Most of us understand that to be taken seriously as a business you need a website.

However, no one had previously explained to me how important social media was in giving an organisation credibility.

“I stalk businesses on social media, especially if I’m making a big purchase. I look back to their posts a year ago to make sure they are who they say they are. I also watch their videos to make sure they know what they’re talking about.”

For instance, Ash spent weeks researching the right person who could teach her about sales.

She says the reviews other customers post are also key to her decision to buy from a business.

If a business does not have customer reviews, it makes it look flimsy.

“Initially, I’ll message a business on its Facebook page and if they don’t respond, I’ll go with a business that will.”

Fascinating stuff. Business owners have to understand that this is the way many customers behave before they even think about buying from them. Those that take this on board will thrive, while those that don’t acknowledge the importance of the new digital world in determining the success of their business will languish.

Staying ahead of the next big market risks