Dealing with the donation dilemma 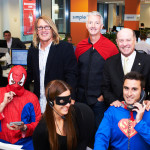 It’s almost September, which makes it, wait for it … Steptember, a fundraising month for the Cerebral Palsy Alliance. Commit to walking 10,000 steps a day and raise funds for the charity while you do it.

It’s actually a great idea that benefits the charity and also the person raising funds for it.

But it’s yet another month purloined by a charity for its own purposes. We have Febfast, Dry July and Movember (I always say I’d be happier to pay a bloke NOT to wear a moustache rather than donate to someone for growing what is often a very sketchy attempt at facial hair).

Then there’s all the ‘international day/year/month of the …’ Don’t laugh, but this year is the International Year of Quinoa. (Before you jump up and down, yes, I realise the plight of the Quinoa is a serious one. What? It’s a grain? My bad.)

I’m bombarded by requests on Facebook and in my inbox to donate to this charity and that, and I always feel really bad if I ignore someone. And let’s face it; it doesn’t take much effort to go to a website and pledge 20 bucks or so. Or even five bucks. If everyone did that, people would raise so much money.

But I’m very glad I don’t work in an office and also need to donate to colleagues’ charity causes. I hear there’s always someone in an office who’s the charity queen (rarely a king), constantly tapping people to donate to the school fete or some such.

So what’s the best way for an office to manage charity collections? Should collections be approved by management? Is that going too far? Does it depend on the size of the office?

Maybe it’s a good idea to take an office-wide approach to charity. That is, pick one and stick to it. If you want to collect for another charity, do it in your own time. Too harsh?

Foreign exchange business OzForex has an interesting way of tackling the charity dilemma. It holds a charity day each year, when staff dress up as superheroes and all profits from the day’s business go to charity. They raised $100,000 in 2012 and hope to double that with this year’s event, held yesterday. The money goes to The Shepherd Centre, which helps children who are deaf or hearing impaired to improve their quality of life and reach their full potential.

What’s good is that while people can make actual donations, it’s the staff’s regular work that really counts. To maximise the funds raised, staff work as hard as possible on the day to make as many transactions as they can, and clients are also encouraged to put business through on the day. You can watch the video here.

It’s a great idea everyone can contribute to, and builds morale in the workplace, too. It also avoids people feeling awkward about saying no to ongoing requests for donations.

So the next time the office charity queen starts handing around the envelope, maybe have a quiet word with management about committing to something in which the whole office can become involved. That way, people won’t feel embarrassed about saying no, and the office can do something about which everyone ends up feeling great.

And if you take OzForex’s approach and get everyone to dress up as superheroes you might even get an eyeful of the boss in a pair of tights. Who wouldn’t pay money for that?

What happens where you work? Is it a perpetual parade of charity requests? Or do you have the charity issue sorted?

Does gold still have a place in a portfolio? Why won’t restaurants take bookings anymore?
Uncategorized