Banks must have superpowers to solve financial crime 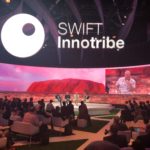 Dispelling the myth technologies will replace people when it comes to solving problems like money laundering and terrorism financing was a central debate at the day two Sibos session on financial crime compliance.

But there’s an urgent need to reassure people about this. “Banks need to communicate to staff that technology is not about replacing them, it’s about empowering them,” said panellist Adrien Delle-Case, policy adviser for digital finance regulation and policy at the Institute of International Finance.

This is critical, given banks require people with the right expertise to use new technologies to help solve financial crime. A poll taken during the session asked the audience about the major barriers to using AI and robotics to combat financial crime. The overwhelming response was lack of expertise, with 65 per cent of attendees indicating this was their major concern.

To resolve this, during the session Miles Ward, Google Cloud’s solutions director, said technology will help to “give people superpowers” to solve financial crime. To this end, Google has developed a machine learning crash course to help educate people about the potential of this technology.

Delle-Case agreed: “We’re far away from AI, but we are moving towards a higher level of robotics to reproduce human decisions – but automating the entire decision-making process is a long way off. It’s all about analysing information.”

Panellists agreed one of the most difficult areas when it comes to combatting financial crime is complying with different nations’ often contradictory data privacy regulatory regimes.

“I’m being forced to choose which law I’m violating,” said panellist Michelle Neufeld,
head of risk and control for the financial institutions group and international at Wells Fargo.

She also acknowledged banks are experiencing inertia when it comes to adopting new technology to prevent financial crime. “We’re slow to adopt new approaches … but disruption is a fact and transformation is a choice.”

With cyber criminals becoming increasingly dexterous, the overwhelming message of the session was that banks’ choices may become progressively narrow unless they act now to adopt new tools to put up a satisfactory defence.